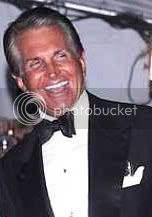 where's josh lucas? where was keanu reeves when was soo in love with him? not on this list. this list is reserved for people, nay, celebrities i've slept with.


1. george hamilton
this is not the first celebrity i slept with, but the first one i told someone about. george kept his black socks on and his tuxedo shirt, which really bothered me.


2. larry the cable guy
i don't know what to say in my defense. i think he's cute in a dumb, sweaty, funny, farty way. yes, he left his hat on. no, he wasn't wearing his sleeveless flannel.


3. warren beatty
i think he was my first celebrity. it sort of just happened. one minute i was chickening out of bungee jumping, the next minute we were inflagrante delicto.


4. jack nicholson
he was a horrible kisser. the only one of my celebrity trysts that i was truly offended by. i don't know how lara flynn stuck with him for so long. he was so inconsiderate. and drunk. and rude.

we have calcium in our bones, iron in our veins, carbon in our souls, and nitrogen in our brains. 93 percent stardust, with souls made of flames, we are all just stars that have people names.

you own everything that happened to you. tell your stories. if people wanted you to write warmly about them, they should've behaved better.
~anne lamott